This month we have been reading Susanna Clarke’s ’Piranesi’ (2020)
‘The Beauty of the House is immeasurable; its Kindness infinite’
I have to admit that I was reluctant to read this book – not my usual sort of thing at all – and to begin with I made slow progress. 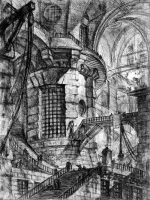 However, the beauty of the descriptions and the mystery and suspense that develops drew me in and I found it a rewarding book to read.
It is set in the ‘House’, a fantasy world made up of Halls filled with classical statues.  Some Halls are very beautiful, others are sinister and potentially dangerous.  The Halls are washed by the tides of the sea and periodically high tides cause flooding while clouds drift across the high walls.  Within these Halls lives the narrator known as Piranesi.  He is alone apart from ‘the Other’ who he believes also lives in the House and who meets him twice a week for research.  Sometimes the Other brings Piranesi gifts, like shoes, vitamin pills, a ham and cheese sandwich.
It is not a lonely existence for Piranesi.  He loves the beauty of the House and he’s explored and kept a careful record of its 7678 Halls and the statues he knows as friends, as well as the human bones he carefully tends in safe containers.  He knows how to feed himself on seaweed and shellfish and how to make use of dried seaweed as ropes and fuel.  He is content.
But gradually another world intrudes.  Mysterious warning messages appear and a strange old man comes and goes.  Piranesi finds a journal written by himself in another world that he can no longer remember.  We become aware that all is not as it seems as ‘the Other’ becomes nervous and warns Piranesi about the message writer who they label ‘number 16’.  At this point the suspense increases and the novel becomes almost a detective novel as Piranesi pieces together the pages of his journal.
The beauty of The House is that it is open to many interpretations – is it the unconscious; the world of the imagination or is it, as is suggested, ‘ideas flowing out of another world’?  Piranesi describes it in meticulous and loving detail and each day is numbered with reference to the day the Albatross appeared.
Piranesi’s name is that of an 18th century engraver, who produced views of Rome, devoting his time to making precise measurements of the ancient monuments just being uncovered.  He also created a series of labyrinthine, sinister ‘prison’ engravings. As in The House beauty and danger appear in his etchings.
‘Piranesi’ has been enthusiastically received: it was shortlisted for the Costa prize and voted Book of the Year by many newspapers including The Times and The Guardian. Members of the book club recognised the beauty of the writing and the world Clarke creates but we all found the first half hard going.  For those who like to listen to their books, it is very well read on audio.