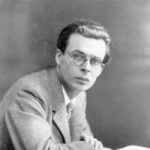 “If one’s different, one’s bound to be lonely.”

Imagine a world where there is no illness or suffering; where embryos are created in test-tubes and raised in hatcheries – their caste determined by the chemicals the State injects into them, brainwashed as they sleep. Where the concept of family, mother or one sexual partner is repugnant – ‘everyone belongs to everyone else’ – and death itself is sanitised and painless. Where doubts and worries are soothed by ‘soma’, which creates virtual worlds, and where games and lighthearted play are constantly encouraged; solitude and books actively discouraged.

Such is the world of Aldous Huxley’s novel ‘Brave New World’,(1932) set nearly six hundred years in the future {‘After Ford’). Human life has been almost entirely industrialised and controlled by a few people at the top of a world State. Into this world comes John ‘the savage’ brought back from one of the reservations, who has been taught to read but only has one book – a complete Shakespeare which he now knows almost off by heart and which informs his view of the civilisation.

John is amazed and horrified by the world he finds himself in. he is befriended by two of the only independent thinkers and an important part of the book is where an amazingly articulate John debates with the Commander — on whether a content compliant society with every need met is better than a society with suffering and grief but also love and happiness. In the end John’s friends are exiled to the Falklands and John himself is kept on a lonely lighthouse for research purposes. When he becomes a tourist attraction he goes and hangs himself.

The best part of the book for me was Margaret Attwood’s introduction. Part of a scientific dynasty, Huxley’s novel is impressive in its detail and elements of it have depressingly come true in our own consumerist society. It is widely praised as a well-written novel but members of the Book Club found it hard going with its long didactic passages and unsympathetic characters. Some of us, not me alas, had read and enjoyed it as teenagers but now found it tedious. However, it leaves us with the question ‘In a perfect world with no poverty, sickness or sadness, what is missing?’ perhaps this is why for many readers it still resonates. I’m afraid many of the club were tempted by this perfect world when compared with the hardships of the world we live in.

Our next book is Gilead by Marilynne Robinson