2021 has been a challenging year for gardeners. (Predictive text offered “rotten year – even better! ). The cold spring followed by spells of heat, drought, night-time frosts and torrential rain left us and our plants puzzled as to what on earth to do for the best. Many seeds sown in the garden failed to germinate. Sowing in modules in the greenhouse is more reliable but we still had failures during the heatwave when the compost dried out quicker than we could rewet it. The difficulties were shared by many of you as illustrated by the greatly reduced number of entries to our August Annual Horticultural Show.   END_OF_DOCUMENT_TOKEN_TO_BE_REPLACED

It is with sadness that we learn of the peaceful

passing of Mavis Farrer, on November 2nd.  at the age of 98 .
For many years Mavis, past resident of Hadlow Down and wife of the late John, mother of Alison and Simon, grandmother and great grandmother. was a key member of the Variety Club and the Horticultural  Society as well as being a co-editor of the Parish Magazine.
The funeral is to be held at St. Phillip’s Church, Ticehurst Road, Burwash, Burwash Weald, UK, TN19 7NA at 11 am on Friday November 26th..

A village Gardening Club was first suggested in our Parish Magazine some time ago but the poor response did not merit any work in taking the idea further. There would seem to have been an increase in interest in village gardens and gardening recently perhaps partially due to people spending more time at home due to Covid. 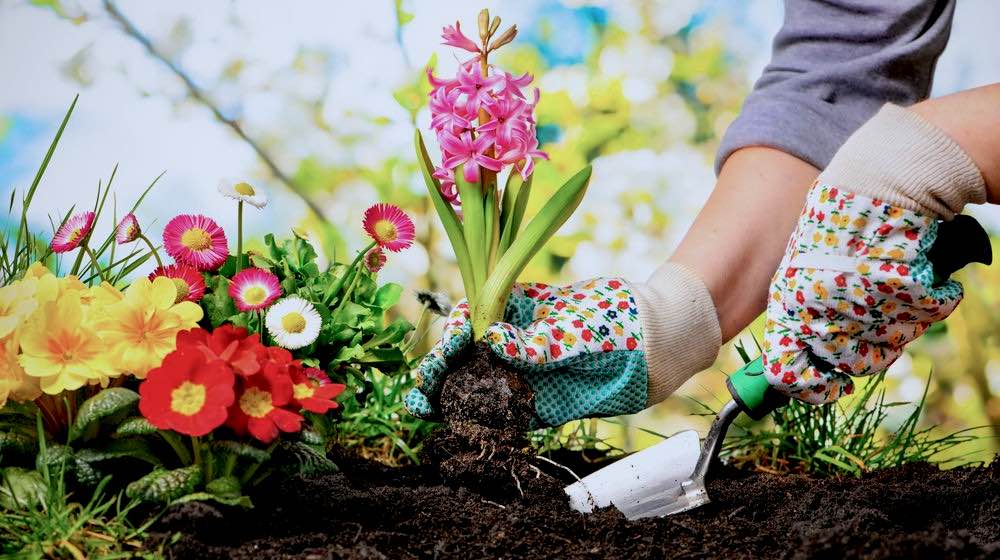 A Hadlow Down Gardening Club has now been created as a Facebook Group just for villagers and village friends who love gardening.
The Group is not officially associated with our excellent Hadlow Down Horticultural Society but can perhaps be used as a supplementary platform where anyone interested in gardening can join and exchange ideas, news, photographs, points of view, information or even plants, seeds or garden accessories at any time of the year without waiting for meetings or events to occur.
It is also hoped that enough people are interested we may be able to negotiate exclusive discounts and benefits from plant, seed & accessory providers for group members
There are of course no fees or paid membership involved just an interest in gardening!
Click on this link to go to the group’s page:
https://www.facebook.com/groups/258004872958565

One of the few constants in an ever-changing climate is the autumn of mists and mellow fruitfulness. Well, mists anyway – often spectacular from our garden looking towards Crowborough in the early morning when it lies in a thick blanket in the valley, the tops of trees poking through here and there. Fruitfulness for us is not traditional – we don’t have room for pumpkins and although fascinatingly colourful we can’t make room for inedible gourds. Instead, we take advantage of the protection afforded by the greenhouse and polytunnel to keep us supplied throughout the coming months with salads. Cut and come again’ varieties include rocket, mizuna and several types of mixed leaves. American land cress can be sown as late as September and is very hardy: even surviving  outdoors.
END_OF_DOCUMENT_TOKEN_TO_BE_REPLACED

The first tomato we picked weighed 1.2 kg, with another whopper a week later. The tomato season had got off to a flying start. Sadly, these triumphs were short-lived; by the beginning of September we saw a few leaves turning brown, and during the following days the blight spread, not only to the leaves but also some tomatoes and the stems. We picked off everything that had been affected by the blight, and over a couple of weeks all the leaves were gone and several of the biggest tomatoes. Then the weather changed, the sun shone and we were able to pick a respectable crop.

From your comments, many of you had the same problem, and wondered if there was any cure. The short answer is No, but there are several things that might help. Firstly, for indoor grown tomatoes, try to keep the air circulating; don’t plant too close together; water at the base of the plants and don’t wet the leaves. Some people claim that spraying with a weak solution of baking powder and vegetable oil, while it won’t cure blight can help to keep it at bay. The are some varieties that claim to be blight resistant, although evidence for this is mixed. The best solution is to pray for a dry sunny summer with very low humidity. Maybe next year?

The slugs had a field day with some of the young runner bean plants, so we’re not overwhelmed with the usual barrowloads, but enough survived to produce a good crop later in the season. The climbing yellow French bean ‘Neckargold’ did even better, and since this bean remains tender and buttery even when the pods swell with the beans so could be left on the plants far longer than most varieties. Courgettes started well but tailed off and we never had to contend with unwanted marrows appearing overnight. By contrast, our one dwarf cucumber was more than enough to keep us going for weeks, and beetroot seemed to enjoy the low – key summer weather.

The weather had a generally more adverse effect on the flowering plants. Our tub of Osteospermum were planted to cope with the continued dry weather but suffered as the skies turned and remained grey. They come from South Africa, so this year definitely did not make them feel at home. We grew a lot of **f and they successfully evaded the ever hungry slugs to grow into strong plants. They brightened up the border, except for several that produced a lot of buds and not a single flower. Curiously our Agapanthus that like Osteospermum originate in southern Africa seemed quite unaffected by the dismal weather and flowered as prolifically as ever. I always used to think they were difficult to grow, but obviously I was wrong.

Final cut of lawns. Last chance to trim hedges. Continue or start planting spring bulbs- except tulips which are best planted in November. Cut  back faded herbaceous perennials and add them to the compost heap, unless you’re too busy, in which case leave them until spring so that they can be used as winter homes for insects. Seed heads left throughout winter look nice when covered in frost and are good for the birds.

We are becoming increasingly used to changes in our climate which frequently undermine our best efforts to till the soil and enjoy the results. Our aubergines have been a striking example. They were planted in 20cm pots, in good rich soil-based compost, fed and watered regularly – but not too much – all snug and warm in the polytunnel, and what happened? Strong, well – grown plants with several glossy aubergines near the base, then, a lot of dead blossoms higher up, followed by some tiny new, pea-sized aubergines. It didn’t take a Sherlock Holmes to discover the probable cause. Adopting his methods, we deduce that the plants first experienced ideal weather and temperature during the early period – hence the well-grown fruits at the bottom of the plants. The withered blossoms higher up the stems showed the plants were now under extreme heat stress. Finally, the baby aubergines at the top showed they were able to set as the temperature cooled again. The keen-eyed sleuth would reinforce his theory by pointing to the fact that we’d had an exceptionally good crop of peppers and chillies, which originate in Mexico and South America and therefore, unlike aubergines, revel in as much heat as they can get. My Sherlock was an adviser for the RHS, who said that he’d had a similar problem in his polytunnel and had solved it by draping a large duvet cover over the tunnel in periods of extreme heat. Useful tip, assuming he knows what he was talking about. END_OF_DOCUMENT_TOKEN_TO_BE_REPLACED

Although the number of categories were reduced this year the Horticultural Society members put on a wonderful exhibition of village gardening and crafts.
the usual delicious variety of cakes and other refreshments were available.
The show was well attended despite Covid and the awful weather!
Watch this space for a list of the trophy winners. 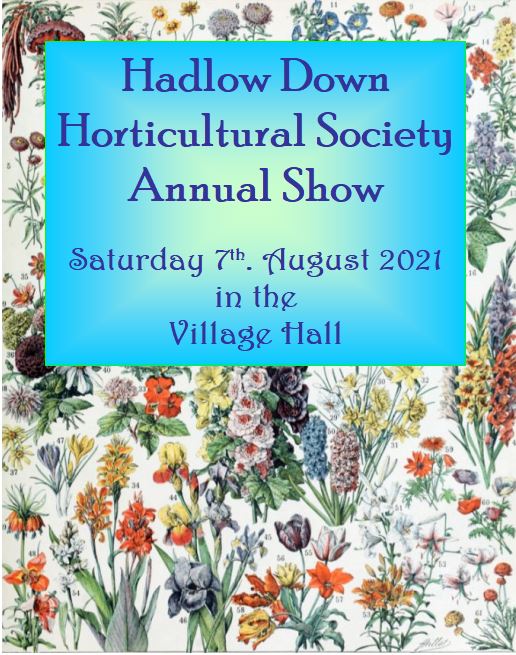 All of our village clubs and societies need some local support during these strange times. Please come along even if you are not entering any categories to see the exhibits and meet up with friends and acquaintances you may not have seen for months!
Refreshments will be available in a gazebo outside the hall.
The Entry Form and rules can be downloaded as a PDF from the Village Web site as can the Full Schedule
http://www.hadlowdown.com/category/noticeboard/news/
It’s tomorrow!!!!!

The garden has recovered from a cold frosty April and a very wet May. So many plants, both vegetables and ornamentals, just sat and sulked for weeks (although surprisingly and counter intuitively here at Rose Cottage mostly untouched by slugs and snails until the recent drier weather arrived). But as the weather improved the garden came to life. Cosmos kept inside against the cold grew strongly enough to escape slug damage which had destroyed an early planting of French marigolds, and French beans caught up with some planted earlier. Tomatoes in the polytunnel were also adversely affected by the cold April nights but are now growing strongly And again, later plantings did better. The moral seems to be, don’t be in too much of a hurry. END_OF_DOCUMENT_TOKEN_TO_BE_REPLACED

A beautiful summers morning was enjoyed by members of the Horticultural Society for their visit to King John’s Lodge on Thursday. An absolutely superb re-start to village community events since lockdown. The gardens have been extended and new design concepts introduced since the last visit some years back. 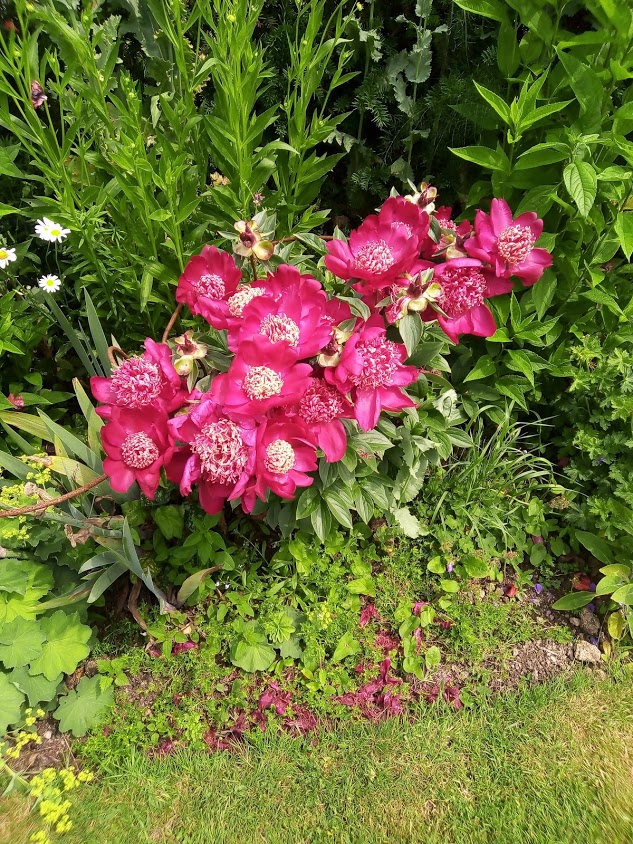 Well done Heather for organising.
For interest the name of that amazing red peony admired by all was ‘Early Scout’ (unfortunately the picture colouring doesn’t do it justice!)
We use cookies on our website to give you the most relevant experience by remembering your preferences and repeat visits. By clicking “Accept”, you consent to the use of ALL the cookies.
Cookie settingsACCEPT
Manage consent