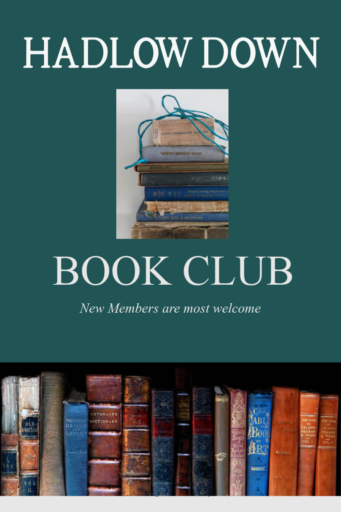 Are you an avid reader? Or perhaps new to the village. Did you know we have a flourishing Book Club?

The book club started about 15 years ago with just 3 members and our first novel was ‘the Girl With a Pearl Earring’. Since then we have grown into a small but enthusiastic group of committed readers. We meet monthly in different members houses for book discussion and a bit of gossip over a glass of wine. Books are chosen democratically: someone suggests a book which we may vote on. We aim to read widely — modern literary books, some classics and, occasionally, a thriller or a biography. We want to enjoy our reading but sometimes to challenge ourselves and read something we may otherwise not have thought of.To find out more about the Village Book Club contact Heather.
Activity Address Rose Cottage and various venues
Name of Contact Heather Mines
Contact Address Rose Cottage, Hall Lane, Hadlow Down, TN22 4HJ
Telephone 07974 204231
Email Address heathermines2@hotmail.com

This month we read another novel set in the aftermath of WW2 – Michael Ondaatje’s 2018 ‘Warlight’. It is narrated by Nathaniel, now 28 years old looking back on the strange adventures of his adolescence.
The novel is in two parts. The first is set in 1945 in the twilight world of post-war London and much of the action takes place at night. Fifteen year old Nathaniel and his sister Rachel have been left by their parents in the care of a mysterious figure called The Moth. Their parents have ostensibly gone to Singapore for their father’s’ job but it is their mother, Rose, who is behind the flight and we gradually discover that she leads a double life as a spy. END_OF_DOCUMENT_TOKEN_TO_BE_REPLACED

Our choice in July was ‘Love is Blind’ by William Boyd. Like many of Boyd’s novels (e.g. ‘Any Human Heart’) it follows the protagonist’s life, in this case ten years of Brodie Mancur’s life at the beginning of the 20th century as he flees around the world from a pursuer bent on revenge. It is therefore a picaresque adventure story owing much to one of Boyd’s heroes, Robert Louis Stevenson, as well as to Chekhov – another influence on his writing. END_OF_DOCUMENT_TOKEN_TO_BE_REPLACED

‘Becoming’ opens with an anecdote that sets the tone of warmth throughout the book. She tells how, having left the White House, and hungry in the night, she goes down to her own kitchen and makes a cheese toastie to eat on her back doorstep, suddenly becoming aware of her newly-found freedom to do something that would be impossible in the White House. So starts the memoir of a woman who grew up in a humble black-district in the south side of Chicago and rose to become America’s First Lady with many achievements in her own right. END_OF_DOCUMENT_TOKEN_TO_BE_REPLACED

Last month the Book Club read Ali Smith’s ‘Autumn’. Published in 2016 soon after the Referendum, it is the first of four seasonal state of the nation novels and was shortlisted for the Mann Booker Prize. It is a novel that has haunted me since reading and re-reading it, largely due to the poetic flow of the language, which has been described as ‘a beautiful poignant symphony of memories, dreams and transient realities’, but also to the complexity of the ideas, the richness of literary allusions, the use of symbolism and the treatment of time. It is an elusive, multi-layered novel. END_OF_DOCUMENT_TOKEN_TO_BE_REPLACED

Carol Shields was born in 1936 and died in 2003. She had five children and her first novel was accepted in the week she turned forty. She went on to become a prizewinning novelist and an academic with an interest in women’s rights. The ‘Stone Diaries’ 1993 is her most famous book. it was shortlisted for the Mann Booker prize and went on to win the Pulitzer prize and the Governor General’s award in Canada. In many ways it reflects her own domesticity as well as her wider aspirations. END_OF_DOCUMENT_TOKEN_TO_BE_REPLACED

On a  cold November evening in 2003, three of us met in the Village Hall and Hadlow Down Book Club began. Our first book was ‘The Girl with a Pearl Earring’.Since then, our numbers have grown; we have met regularly and read a wide range of books with some lively discussion over a glass of wine. Our meetings are informal and non-threatening and books are chosen democratically. Although we aim to read some challenging books, we do so without pressure and it is an enjoyable experience for all of us.

I’ve now been asked to write a short piece on a regular basis about the books we are reading, and I thought I would introduce it with an overview of some of the books from the past year.

Another short novel was Ian McEwan’s ‘Nutshell’ – a modern version of ‘Hamlet’ narrated by the unborn child in the womb of the Gertrude character. Extremely funny – this foetus develops a taste for fine wine and has a view on the state of the world from Radio 4 that his mother listens to. Our other McEwan Novel ‘The Children Act,’ was made into a successful film after we had read it – we like to think we are ahead of things. For those who, like me, enjoy dialogue and, in particular, closely-argued court scenes, this was an absorbing book about a moral dilemma and it was enhanced by McEwan’s usual erudition.

Elizabeth Moss was a new writer to us and we enjoyed the wit and humour of ‘Tidal Zone’. It was serious and potentially tragic about a teenager who suddenly has an anaphylactic seizure and dies for a few minutes. It is also full of humour, however, with its all too sharp observation of modern institutions and middle-class family life. Moss is herself an historian and her narrator’s research into the bombing of Coventry and the rebuilding of the cathedral provides depth of meaning and enhances a satisfying read. I have since read her ‘Night Waking’ and would recommend this novelist.

We have read a few Mann Booker prize winners including ‘The Siege of Krishnapur’ – a horrifying but hilarious account of moral and physical collapse by JG Farrell. We also read Penelope Lively’s ‘Moon Tiger’ (shortlisted for the Booker 50 Year Golden Award), and then ‘The English Patient’ which actually won the award. These two novels about the aftermath of WW2 marked a high spot in a year of enjoyable reading. Lively’s novel, written from the narrative viewpoint of a dying but reprobate old woman looking back on her unconventional life and loves as a war journalist crackles with life. ‘The English Patient’ by way of contrast centres on four war-scarred survivors who find refuge and healing in a ruined Italian castle – a place of haunting beauty and concealed dangers. It was quite a challenging read but one that continues to resonate in the mind. We all felt it was well worth reading.

Sometimes we enjoy something lighter and Gail Honeyman’s ‘Eleanor Oliphant is Absolutely Fine’ was  easy but satisfying with a real surprise at the end. About loneliness, it was sad but also had some very funny moments. We contrasted this with another novel about loneliness, ‘Our Souls at Night’ by Kent Haruf, a subtle, sensitive study of the relationship which develops between two elderly people who decide to spend platonic nights together.

Our current read is Carol Shields’s ‘The Stone Diaries’ and we meet on Wednesday 20th March to discuss it. Should you wish you join the group, contact me at heathermines2@hotmail.com or 830314.